Back in May 2014, I introduced you to my friend Amanda when I sewed a “Mustaches & Elephants” quilt for her soon-to-be-born baby boy, Liam. It was one of my very first rag quilt projects, in a size/layout that I’ve repeated for many new babies since!

This October, four-year-old Liam is going to have a new baby sister – Logan! And… spoiler alert… Auntie SewLindsaySew made a quilt for Logan, too. I know you’re shocked. 😉

Logan’s nursery will have a “woodland animal” theme, so I chose a deer/owl/squirrel fabric as my starter print and then worked from there. All of the fabrics are from Joann Fabrics. I think I say this with every project, but… this might be my favorite fabric combo yet.

But the best part about Logan’s quilt is that I knew her name in advance and could incorporate it into the quilt. I used the “My ABCs” Paper Piecing Quilt Pattern from Diane Bohn with FromBlankPages, which I won a few years ago in a giveaway Diane was hosting on Instagram. I’ve used the letters a few times for other projects (like this amazing Winnie pillow) but never a baby quilt. Since Amanda and her husband Josh shared Logan’s name so early on, I was happy to do it with this project!

Of course, no SewLindsaySew project is complete without a behind-the-scenes photo of Winnie getting all up in its business. Every time I turned around, she was making herself right at home. Here’s a pic from when I was in the process of adding the name.

As it turns out, the color scheme I chose for this quilt is also very similar to what Amanda has chosen for the baby’s room, and I didn’t even know it. Coincidental and magical! I guess that’s why we are friends. 🙂

First comes the love, then comes the marriage, then comes… my very first nephew in a baby carriage! At around 4 a.m. on September 24, I was overjoyed to receive a message that Finn Joseph had finally arrived. Isn’t this the most precious baby you’ve ever seen? I know I’m biased, but… BEST. NEPHEW. EVER. Look at that baby burrito bundle. LOOK AT HIM. (It’s my job, as the auntie, to tell you to LOOK AT HIM in all caps. Because that’s what aunties do, and also, BECAUSE HE IS AMAZING.)

Given my brother Jason’s love of planes, while most babies are delivered by a stork, I’m fairly certain Finn arrived via whimsical airplane, although my sister-in-law Sarah may have a different perspective. 😉 My brother is a recreational pilot, so him and Sarah like to go on lots of little adventures in their plane. Jason even asked Sarah to marry him while they were flying. And both of the baby’s grandfathers – mine and Jason’s dad, and Sarah’s dad – also have a special interest in airplanes. So needless to say, this baby has no choice but to love airplanes. 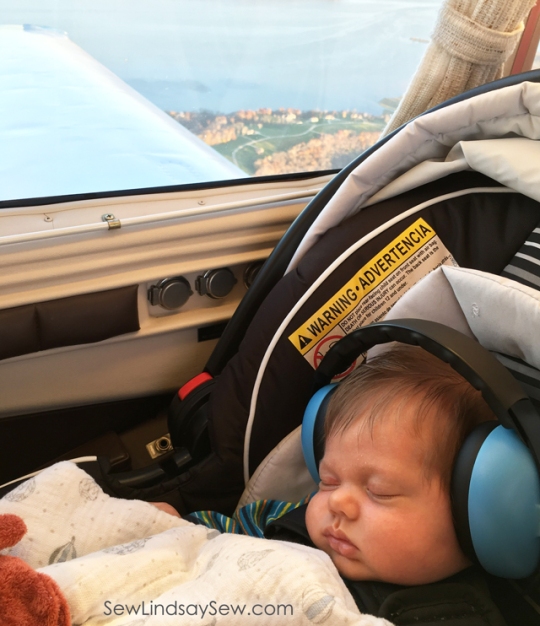 When I heard a baby was on the way, I knew an airplane-inspired gift was in order.

I researched some airplane-inspired quilt patterns, and while there were many miscellaneous features that I liked with each pattern, there wasn’t one pattern that stood out as The One, so I decided to do my own thing.

I don’t know why I always choose to go down this road of doing “my own thing.” It’s mentally exhausting, I experience a ton of decision fatigue and I spend most days convinced that I’m just messing the whole thing up. But at the same time, I refuse to settle for what’s out there … and that’s why I love making things! Ahh, the beauty (and the pain) of DIY.

I decided to take a risk and do something I’ve never done before, combining two skills from my sewing/quilting experience toolbox: foundation paper piecing and rag quilts. While I’ve done quite a bit of each of those things separately, I’ve never rolled the two skills together. But I’m most comfortable making rag quilts for baby gifts, and I was equally passionate about wanting to include paper-pieced airplanes.

Other than substituting the airplane blocks for some solid blocks, the process was really no different than the typical raq quilts I’ve made. A few adjustments:

I love the way this quilt turned out, and I was especially pleased with the fabric combination, the square layout and the inclusion of the paper-pieced blocks. I wouldn’t hesitate to make a quilt like this again, replacing the airplanes with any other fun paper-pieced shape.

But the true test was introducing Finn to his quilt a few weeks ago when I met him for the very first time. Actually, it wasn’t really Finn’s first time seeing his quilt. He was already a month old by the time I got to fly across the country to meet him, and he had spent a lot of quality time in his nursery by the time I met him. But he was polite enough to act surprised for the photo anyway. What a nice boy! 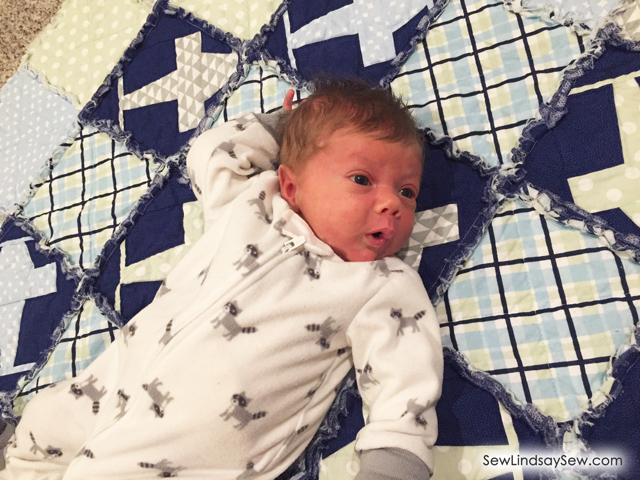 I think it’s safe to say – this quilt is Finn-tested, Finn-approved!

When I started this blog, I promised I’d share the failures in addition to the successes. So here you go. A fail!

Well, in my defense, it’s not really a sewing fail. It’s just an unfinished project. So, a failed timeline. Rarr.

The #SewMyStash2015 challenge proposed by Leasa for June was called “Harvest June” and we were tasked with making something fall-related. I was pretty excited about it because I’m always behind when it comes to sewing for holidays. How exciting would it be to have a fall-related item completely ready-to-go in the fall because I had already completed it in June?

But, excuses excuses: dealing with all this moving nonsense in the past month or so has really put me behind. I’ve spent a lot of time getting the new house in order (or, attempting to – I still have so much work ahead) and sadly, getting the craft room in order has not been at the top of priority list. Boo.

END_OF_DOCUMENT_TOKEN_TO_BE_REPLACED

The night before my roommate Katie‘s birthday, she heard me rustling through my craft supplies and asked what I was doing. I told her I was making her a birthday coupon. She thought I was kidding, but I wasn’t. 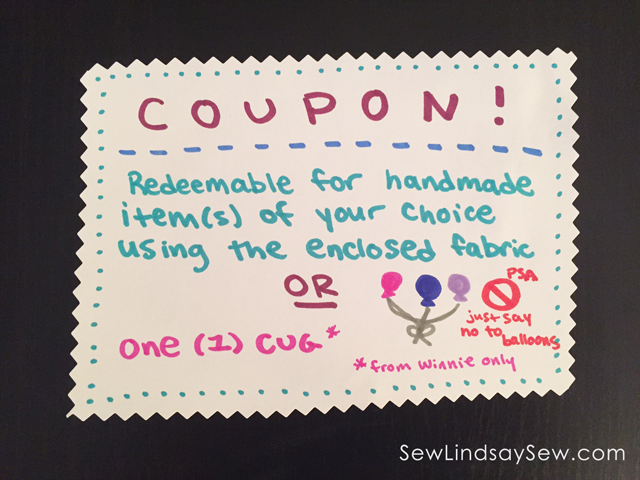 FYI, a “CUG” (according to Katie’s niece) is a cuddle/hug combo. Also, Winnie hates balloons – hence the PSA.

The idea of a “coupon gift” seems a little silly in adulthood, but I really wanted Katie to make the decision about what I should make… using this INCREDIBLE WINNIE FABRIC.

Yes, that is Katie’s dog, Winnie. I designed this custom fabric using real photos of Winnie and printed a yard of it at Spoonflower.com.

END_OF_DOCUMENT_TOKEN_TO_BE_REPLACED

Raindrops on roses and whiskers on kittens…
Bright frosted DONUTS that haven’t been bitten…
Quilty techniques on the gifts Santa brings…
These are a few of my favorite things. 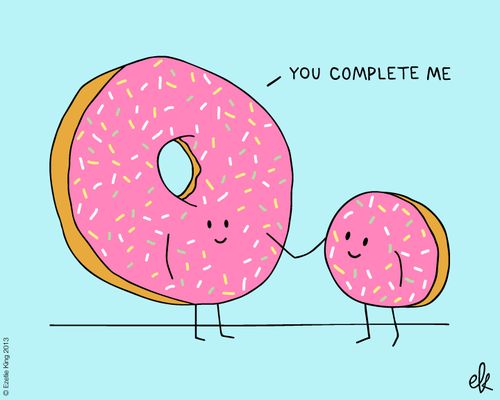 So does my roommate Katie. When one of us says, “I want donuts,” the other roommate says, “NOM” and then we’re in the car en route to our local donut provider in a matter of minutes. We have donut ornaments on our Christmas tree. And the dog has donut toys.

I’ve already told you about how Katie is crafty (or rather, “Krafty”) so this year’s Christmas present for Katie was a combination of our mutual love for both donuts and crafts.

END_OF_DOCUMENT_TOKEN_TO_BE_REPLACED

This fall/winter, I haven’t been that great about updating the blog – yikes. But just because my blog has been stagnant doesn’t mean my crafting has. I’ve been doing lots of things behind the scenes, just haven’t taken the time to write about them. Or I can’t, because I’m in Christmas elf mode and everything is a secret!

Even though Halloween is over, I want to rewind a little bit and highlight this little experimental project I tackled earlier in the fall. I took my first shot at foundation paper piecing a quilt block! In my quest to follow crafty social media accounts, I’ve found a lot of quilt-y friends who frequently post about paper piecing. Needless to say, their constant paper piecing posts (can you say “paper piecing posts” ten times fast?) piqued my curiosity and I decided to give it a try around Halloween with this pumpkin paper piecing (free PDF pattern available here).